Today i have something unusual (at least for me) to share with you; it's an analysis of the world cup matches.

Of course, i have no idea about soccer, but i do know how to transform data, and as such i will show you something i created by scraping data off FIFA's website. I will proceed to explain the whole process in this blog post.

For this analysis, i wanted to take into account all matches played in the "preliminary" rounds, as such i created a scrapy python scraper which extracts all match results from the following pages:

The data i extract is the teams playing the match, and the final score of each team. The final format of the csv is:

Here we leave the Python world to enter the R world :) (I know it can also be done with Python, but i haven't explored that part of Python yet)

I created a R script that starts by loading the CSV to a data frame, and then starts grouping and summarizing the values such that i can have the matches expressed as a graph, i want to have a losing team "pointing" to the winning team. This is because i later want to apply the Page Rank algorithm, the one that google uses to rank websites.

If you don't know the page rank algorithm, it basically says "If you are linked to by important websites, then your website is important" (oversimplified).

Where weight is a value that i determine from the relative importance of the match, i determine it based on the amount of matches played in the same area, or a fixed value if it's not a preliminary match.

With the data transformed into place, i used the igraph package to create a plot with tkplot to see what i had transformed, you can see the plot with only the classified teams here:

So, what's the result of applying the page rank? As of games played until 27th June, the results are the following (More points is better):

Show me the mon- i mean the code

The github repository for this analysis is sicarul/worldcup_scraper

The steps to run it are: 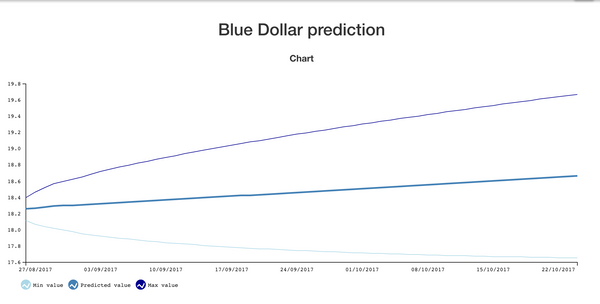 If you have visited recently my website, Bluelytics, you will notice there is a new section named "Predicción", which is a forecast of the value of the Blue

I have a new creation to share with you: http://bluelytics.com.ar This website is an interface to scraped data from La Nacion, Ambito Financiero and DolarBlue.net, those